During this past week, we had one very emotional, challenging, but absolutely life-changing day. We went to meet Eitan, the security head of Kibbutz Malkiya, right next to the Israeli 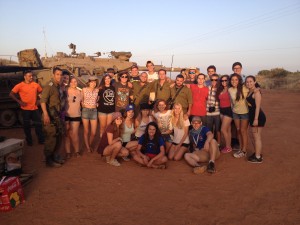 border with Lebanon. On the Israeli side, next to the border, we could use lush vegetation, with fruits and vegetables planted for the Kibbutz members, the soldiers, and to sell, while most of the other side was barren and abandoned.  Eitan took us to see a group of IDF soldiers who were so kind and sweet!  It was insane seeing how real the IDF really is and that the soldiers are only a few years older than us. They loved the food we brought them and let us sit in the tanks too. We were able to speak with them individually and get to know a little bit more about their stories. One of the soldiers we talked to told us that the thing he loves most about the army is the close relationships formed there.

We met soldiers from all over Israel and one who made Aliyah from New Jersey. While we were posing for a picture, the soldiers received a call and had to run down to check on the fence. Although it was scary seeing the young men moving into action and realizing that a lot of soldiers have to live there and deal with these things everyday, we were glad that we were able to spend some time with them, give them some snacks and cold drinks, hear their stories and make them smile!