By Chad Allen and Sami Weisband

Hello! We are Chad and Sami, two of the ten amazing people enrolled in this year’s Ozrim program at Camp Stein. We are part of the Ozrim (CIT program) at camp, but are living together and doing activities as campers until the end of the first session. We really haven’t spent much time at camp yet, though, because we were gone for four days on our Ozrim overnight! 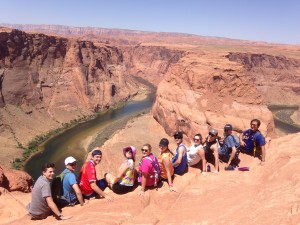 The Ozrim trip is very different from any other camp trip we have been on. That’s because we planned it all ourselves! Typically, planning an overnight is left to the counselors or unit head, but this time, we did all the work. From coming up with a schedule to writing programs and making phone calls, the trip was uniquely our own. Our destination was Lake Powell, but we didn’t plan on just sunbathing. We drove through the small town of Flagstaff, swam at Lone Rock, saw the beautiful Antelope Canyon, and posed in front of Horseshoe Bend. The memories (and pictures) are some things that we will never forget.

On the Ozo trip, we truly bonded as a unit, from cooking our own meals on one small built-in grill to playing games where we learned more about each other as individuals, even after knowing each other for years prior to this one. After a series of unexpected events, we ended up getting our van stuck in the sandy desert, which only gave us one more opportunity to get even closer!

To say everything went according to plan would be untrue, but to say we would’ve changed the way things went given the opportunity would be a lie as well. By planning it ourselves and executing our plans, we know just what to do next time. Through all the dirt, grime, bugs, hard work, and laughter, this trip gave us such great knowledge about future endeavors, whether it be as a team or on our own. We would not have taken it any other way.