Reflections on a Senseless Act

Many of us feel emptiness as the bodies of Gilad Shaer, Naftali Fraenkel, and Eyal Yifrah were discovered in Hebron. The connection that we have developed with these boys is based on one thing, our Jewish heritagehollister co . When a Jewish voice is silenced, the magnitude of the catastrophe resonates with our people. I sat at breakfast on Monday morning, poking at my food. I was poking at my food and fighting back tears. I was messaging my friend, Amittai, in Israel and he was on a public bus on his way home. He said that the bus was silent save for the soft sound of weeps and crying. Our emotions were synchronized, even when we were 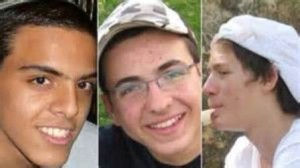 separated by 11,000 kilometers. This senseless act of terror shocked myself and out community. These boys were simply yeshiva boys, students, camp counselors, and athletes, murdered by Hamas because of one thing: hatred/ Hatred hollister outlet has claimed the lives of three boys my age and younger, but the glimmer of light we have in this morbid time is a bond. The bond between the Jewish people is too strong for hatred to break. It has stood against the wrath of G/d, it has created a state and defended our safety, and it will continue to do so. We as a people, as a family, have a here connection that nobody will ever rob from us. As we sit here feeling sorrow and hurting for the mothers, fathers, and siblings of

Gilad, Eyal, and Naftalhttp://www.mepix.fr i, we must savor and appreciate the bond we share with them as a Jewish people.