Message from the Judaics Director

Greetings from the Judaics Director

In the book of Genesis, Jacob, one of our forefathers, is on his way to meet his estranged brother, Esau. Jacob stands on a river bank, surrounded by all of his belongings and his entire family. Just as he’s about to make the journey, a man – understood to be an angel – comes and wrestles with Jacob 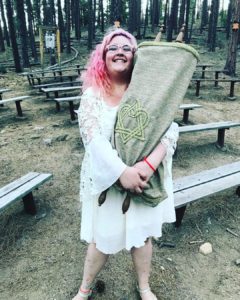 until daybreak. When the angel tries to leave, Jacob demands a blessing from him. In turn, the angel gives him the name Israel – because he wrestled with G!d.

This summer, our staff and campers are joining this divine wrestling with Israel, the Jewish state and homeland. In limmud, our campers have been discussing all of the ways in which the state/people of Israel asks us to be better, more ethical friends, Jews, and humans.

Thus far, we’ve gotten into the ring with one another through asking tough questions: what does it mean to be a chosen people with a chosen land? What are the ways in which Israel deals with issues of gender through the acceptance of women in the IDF? What does the Israeli declaration of independence say, and how can the values it expresses help us with our own definition of our community? How do Israelis make their voices heard by their government?

With the help of our eleven sh’lichim, Israeli delegates, our staff and campers have been able to wrestle alongside of thousands of years of history and hope of a Jewish state.

We are having a blast here – learning, praying, and living with one another.

Wishing you a summer as blessed and laughter-filled as ours,